Christian Ocampo
Ortigas Land
Member Since 2019
Ortigas Land is one of the pioneers in the Philippine real estate landscape. It's currently developing mixed-use estates in the middle of Metro Manila, which are The Capitol Commons, Circulo Verde, Greenhills Center, Ortigas East and The Galleon at Ortigas Center

Diane Principe
Robinsons Land Corp
Member Since 2021
RLC Residences properties offer a home that features an elevated lifestyle experience. Also give the homeowners a chance to live smart and productive through its smart home features and digital solutions for a hassle free condo experience.

Fort Bonifacio, Taguig
* Sale shall be on "as is where is" basis.* All offers are subject to Management approval.* Availability of units and prices are subject to change without prior notice.* Misprints should not be construed as misrepresentation of the property.* Lease offers welcome for all condominium units listed except those under ""With Authority to Sell"". Please call for price.   For concerns, please visit your branch of account, call the Customer Contact Center or the BSP Financial Consumer Protection Department at (02) 708-7087. To learn more about our Consumer Assistance Management System, please visit www.bdo.com.ph/consumer-assistance. Condominium Units
₱ 6,988,700
1
Bedroom
41 m²
Floor area
View Info
Contact Agent

Fort Bonifacio, Taguig
The Montane is a 39 floor, prime residential project by Avida in BGC is strategically located along 8th Avenue and 35th Street.This high rise development is overlooking the best of BGC and walking distance to everything you need. Take advantage of our Early Move In Promo.For as low as 5% downpayment move in to your unit upon clearance. Condominium property for sale in Fort Bonifacio, Taguig, Metro Manila
₱ 11,000,000
1
Bedroom
1
Bath
37 m²
Floor area
View Info
Contact Agent

2 Bedroom Condominium Unit for sale at Bellagio Tower with a Nice View, Taguig

Fort Bonifacio, Taguig
The two-bedroom unit at Bellagio Tower is located in a prime area at Bonifacio Global City, Taguig. It is in the vicinity of commercial establishments like:  Shangrila Hotel, restaurants, local and international schools, banks, and St. Luke's Hospital. You can easily shop at SM Aura supermall, Bonifacio High Street and Market-Market.  The unit is nicely furnished and with a parking space. It has a separate room for the maid with bath and toilet. Condominium property for sale in Fort Bonifacio, Taguig, Metro Manila
₱ 19,500,000
2
Bedrooms
2
Baths
97 m²
Floor area
View Info
Contact Agent

For Sale 2 Bedroom Unit 29J at BGC Lease to Own at 5% Move in, Taguig City

Fort Bonifacio, Taguig
Avida’s latest development in the country’s newest lifestyle and business destination, Bonifacio Global City, Avida CityFlex Towers BGC is thoughtfully planned to let you experience life from a different perspective. Here, you can enjoy the flexibility of designing your space to truly fit your needs. You can even choose one of their SoHo (Small Office Home Office) units for a true, affordable work-from-home lifestyle. At Avida CityFlex Towers BGC, going from work to play is a breeze. Here, your home is not only close to everything, its amenities are thoughtfully-designed to make living in the city a truly balanced, enjoyable experience. Amenities include: Adult & Kiddie Swimming Pool Clubhouse with Function Hall Children’s Play Area Outdoor Gym Landscaped Area SoHo Lobby Residential Lobby Retail Area
₱ 8,500,000
1
Bedroom
1
Bath
36 m²
Floor area
View Info
Contact Agent

Fort Bonifacio, Taguig
Property Code: 436-SC-TSU The Suites BGC 4 Bedrooms Size: 277 sq.m. Fully Furnished With Balcony Facing West 180 Degrees view 3 Parking Slot  FOR SALE: PHP 160,000,000.00 DISCLAIMER: Property details and/or availability are subject to change without prior notice and confirmation of the property owner. please contact us at the numbers found on the side of this screen. Under Licensed #5055 The LEAD Realty
₱ 160,000,000
4
Bedrooms
277 m²
Floor area
View Info
Contact Agent

The Lead Realty
MEMBER SINCE 2021
Featured
8

Fort Bonifacio, Taguig
2 Bedrooms, with parking slot 7th floor (2nd residential floor, because first 5 floors are parking)Corner unit facing amenities, which are only one floor below the unitTotal floor area - 55.91 sq.m. Ready for turnover since before ECQGreat location in BGC! Right across Uptown Mall and Grand Hyatt Manila Walking distance to St. Luke's RFS: No longer working in BGC (Hoping to sell before I officially receive unit turnover, so we can avoid additional taxes on transfer to buyer)Avida's current list price is P16M for the unit, and P1.5M for the parking (total P17.5M) My price: P15.5M (you save P2M!) Parking slot is strategically situated 2 floors below the unit. The unit and the parking slot are right beside the same set of stairs at the fire exit. Very accessible if you don’t want to wait for elevator! Also pretty easy to go out in case of emergency.DIRECT SELLER HERE. Interested parties, please contact me for more details. Condominium property for sale in Fort Bonifacio, Taguig, Metro Manila
₱ 14,500,000
2
Bedrooms
2
Baths
55 m²
Floor area
View Info
Contact Agent 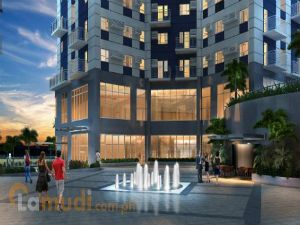 Why should you invest in a condo for sale in Fort Bonifacio, Metro Manila?

Known simply as Bonifacio Global City (BGC), Global City, or The Fort, Fort Bonifacio is a former military camp owned by the Philippine government that was privatized in 1995 through the Bases Conversion Development Authority (BCDA). Developed by the Bonifacio Land Development Corporation (BLDC), a joint venture by the BCDA, Ayala Land Corporation, and Evergreen Holdings, BGC is now Metro Manila’s third most important business district after Makati and Ortigas Center, and will soon become the home of the Philippine Stock Exchange.

A common misconception about Fort Bonifacio is that it is a single real estate project developed by one company. Although the BLDC is the legal entity in charge of the overall masterplan of BGC itself, the greater Fort Bonifacio area is composed of several real estate projects (BGC being one of them) by different developers—all of which offer plenty of BGC condos for sale. These projects include Forbes Town Center, Uptown Bonifacio, McKinley Hill, and McKinley West by Megaworld Corporation, Veritown Fort by Federal Land, and central BGC itself.

How to Get to BGC?

There are plenty of ways to get to BGC.

If you’re coming from the North of Metro Manila, you can ride the MRT or a southbound bus going to Baclaran then alight at MRT Ayala Station. Another option is to take the Premium Point-to-Point (P2P) bus at Trinoma Mall bus terminal and get off at Glorietta 5, then walk to MRT Ayala Section. From here you can ride a jeepney at the jeepney terminal under MRT Ayala Station and take the jeepney going to Market! Market! Or better, take the north exit in MRT Ayala Station and look for the BGC bus terminal. Take the East route via Kalayaan then alight at Market! Market! If you’re coming from Mandaluyong or in the central part of the metro, go to MRT Guadalupe Station. Take the north exit to find the jeepney terminal near Jollibee, and ride a jeep going to AFP Housing or Gate 3 which will drop you at Market Market!

If you’re from the South, ride a northbound bus going to Monumento or Fairview and get off at MRT Ayala Station.From there you can ride at the jeepney terminal or the BGC bus terminal. You can also ride an FX or van from SM City Bicutan to Market!Market! or a jeepney from Sucat to Market!Market! If you’re coming from Alabang, ride a jeep going to FTI then take a BGC Bus Arca South route and alight at Market!Market!

Condo for Sale: BGC & Other Areas in Fort Bonifacio

Considered as the physical core of Fort Bonifacio, BGC is where most of the area’s most renowned landmarks, towers, and leisure centers are found. These include Bonifacio High Street, Serendra, The Fort Strip, Market! Market!, Shangri-La at The Fort, and numerous parks and recreation areas. It is also in this area where the future headquarters of the Philippine Stock Exchange is being built, along with some of Ayala Land’s high-profile residential towers. A condo for sale in BGC can be found in The Suites, West Gallery Place, East Gallery Place, and High Street South Block, among others.

Situated at the western side of The Fort next to the Manila Golf Club, Megaworld’s Forbes Town Center is a 5-hectare township of high-rise condos, a restaurant strip, and retail areas. Close to it is Burgos Circle, whose most famous landmark is The Trees, an art installation by local artist Reynato Paz Contreras.

McKinley Hill is the older of these two townships by Megaworld, which boasts more than 30 condo towers, 17 office towers, and a Venetian-themed mall. It is also home to several schools, including the Chinese International School Manila, Enderun Colleges, and the Korean International School Philippines.

McKinley West, on the other hand, is currently being developed, and when completed will boast of an upscale village, office towers for business process outsourcing (BPO) companies, and high-end residential condos. 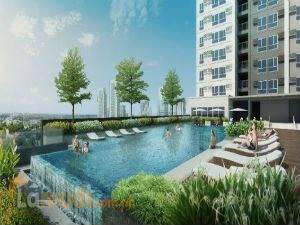 A project by Federal Land, Veritown Fort is situated in the northern part of Fort Bonifacio whose skyline is made more prominent by the Grand Hyatt Manila, a mixed-use tower that will house a Hyatt hotel, high-end condo units, and corporate offices.

Several condo projects in this area are also in the works.

There are several condos for sale in Fort Bonifacio located in other locations within the area that offer plenty of condos for sale, including the areas between McKinley Parkway and 26th Street, where condos like The Infinity, South of Market, Pacific Plaza Towers, The Beaufort, Trion Residences, and Seibu Suites are found. Beyond this area are more high-end condos in BGC, including Arya Residences and Essensa Private Residences.

With plenty of world-class condos for sale in Fort Bonifacio, investing in one surely costs a fortune. At present, a condo for sale in this part of Taguig City costs PhP 242,000 on average which is a 2.11% increase from the previous year. This shows that owning a property in Fort Bonifacio, though pricey, is highly recommended due to the continuous increase of its price throughout the years. Thus, you can resell your property higher than its original price and you get to get the initial capital you initially invested in it.

Are there affordable condos for sale in Fort Bonifacio under PhP 5M?

Yes! You can score cheaper condos for sale in Fort Bonifacio for only PhP 2,100,000 to PhP 5,000,000. Most of these are studio to two-bedroom units with a floor area ranging from 21 to 67 square meters. These units are often bare or are foreclosed. If you’re lucky enough, you can even purchase a unit with a parking lot under PhP 5M.

Are there condos for sale in Fort Bonifacio with a balcony?

Are there condos for rent in Fort Bonifacio, Metro Manila?

Find Other Properties in Fort Bonifacio